Welcome to Campaign of the Week, where we explore some of the freshest and most exciting campaigns from the brands that are engaging their Gen Z audience and catching our attention every week. Today we’re looking at Channel 4’s campaign to celebrate the latest series of the smash-hit comedy, Derry Girls.

You’ll be hard-pressed to find someone who hasn’t watched Channel 4’s fantastic comedy, Derry Girls. The programme follows five teenagers, Erin, Orla, Michelle, Clare and James, and tells the stories of their lives in Derry during the final years of The Troubles. This month the third and final series is being released, and to promote this exciting launch, Channel 4’s in-house marketing team have partnered with Smash Hits music magazine and Bauer Media to create a fun, colourful and perfectly nostalgic magazine.

Smash Hits magazine was a British music magazine running from 1978 to 2006, and was the go-to place for pop news, gossip and reviews. Fully embracing the ‘90s theme, Derry Girls and Channel 4 have released 150,000+ copies of their iconic, limited version of the magazine and distributed them across the UK, as well as bagging them up in copies of Heat and Closer magazines.

The 28-page magazine includes exclusive interviews, double-page posters of characters and Derry Girls/Smash Hits-themed features, such as the Biscuit Tin interviews. The magazine centres around the ‘last-day-of-school chaos’ that the new season embodies, and perfectly encompasses ‘90s nostalgia.

If you didn’t manage to get your hand on a physical copy of the magazine, you can check out the digital version here. The campaign is also being supported by billboards and TikTok-exclusive content, whilst music giants Spotify are also encouraging fans to create their own mixtapes.

Lucie Cave, Chief Content Officer at Bauer Media and Creative Editorial Director of the magazine, said: “With season three of Derry Girls set in 1998, reviving our iconic 90s magazine Smash Hits for a one-off special was a no-brainer. Working incredibly close with the Channel 4 team meant that we were able to keep the energy and essence of both brands in sync throughout and ensure that the show was seamlessly woven throughout all editorial – including the fan-favorite ‘Biscuit Tin’ interview and classic ‘How to Dress Like a Pop Star.”

This campaign ticks all the boxes, and it’s one of our favourites of the year so far. It appeals to Gen Z fans (after all, who doesn’t love the ‘90s pop aesthetic) and will also catch the attention of millennial viewers who were fans of the original Smash Hit magazine.

Thanks to its uniqueness, it’s a sure way to catch the attention of new fans (after all, we’ve never seen a campaign like this before!), but the little Easter Eggs throughout also appeal to hardcore Derry Girls fans. These little references to key locations in the show, such as adverts for Dennis’s Wee Shop and Finnoula’s Fish & Chips, really take it to the next level.

It’s fun, eye-catching, free, entertaining and one-of-a-kind, as well as catering towards audiences across a number of platforms… is this in the lineup to be THE campaign of 2022?

And you can hear more from Bauer Media’s Lucie Cave in this month’s Voxburner+ deep dive, where she’ll be discussing gender and identity. Find out more about Voxburner+ here. 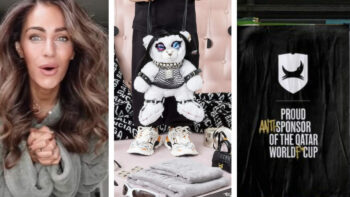